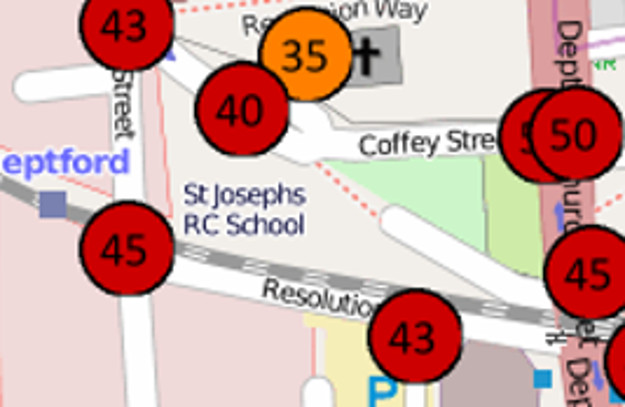 Pollution Map: Air pollution monitoring surveys were undertaken by London groups in Deptford and Greenwich. The map shows levels of nitrogen dioxide air pollution for January 2014 for one month (microgrammes/m3) around Deptford Church Street and surroundings.
Source: Open Street Map with symbols by No to Silvertown Tunnel (Stewart Christie).

We supported two groups in a citizen science project to monitor nitrogen dioxide (NO2) air pollution in early 2014. They set up gas diffusion tubes to monitor the pollutant at 150 sites in January 2014, and removed them for analysis in February 2014. We'd worked with one of the groups in 2013: "No to Silvertown Tunnel" - a residents campaign which opposes the proposed Silvertown Tunnel. This road tunnel under the Thames would link the London boroughs of Greenwich and Newham. The other group we worked with was a residents group called "Don’t Dump on Deptford’s Heart" who oppose a worksite for Thames Water on a green space in Deptford (London borough of Lewisham). The worksite would close a road and displace traffic; bring construction traffic and extra air pollution in an area which was heavily polluted; and occupy a much valued public space.

The results of the Deptford study are presented below with those from No to Silvertown Tunnel. For more information about Don't Dump on Deptford's Heart see their website: http://dontdumpondeptfordsheart.wordpress.com/

Below is the press release which publicised the survey of the two groups, and explained the results.

People across south-east London are living with air pollution levels of as much as two-and-a-half times over European legal limits - and this is set to get worse if plans for two huge construction projects get the go-ahead.

Local campaigners joined forces to monitor nitrogen dioxide levels at 150 sites across south-east and east London during January, in what’s believed to be the largest “citizen science” air pollution study ever seen in the capital.

The readings, which were taken at sites across five London boroughs, show horrifying pollution levels right where people live, work, shop, and go to school.

Prolonged exposure to air pollution causes respiratory problems and can lead to cancer. Pollution from motor vehicles can also affect the development of children’s lungs.

Yet plans to build the Silvertown road tunnel between Greenwich and the Royal Docks, piling more pressure onto the local road network as more road capacity encourages more traffic, will make pollution worse in the long term.

Meanwhile, Thames Water’s proposal to build a 17m wide shaft on Deptford Church Street as part of its "super sewer" plans involve the partial closure of a major road artery for over a year, causing chaos on all major roads in the area.

The study was carried out between 6 January and 7 February 2014. If it hadn’t been the wettest January since records began, it’s likely the results would have been far worse.

Recent media coverage of the Saharan dust cloud over London brought air pollution issues into the spotlight - but the dust cloud only made the capital’s poor air quality more visible.

The campaigners now plan to combine their figures with local authority data to get a full picture of air pollution across the area.

The groups behind the study were No To Silvertown Tunnel and Don’t Dump on Deptford’s Heart, with backing from Network For Clean Air, which helps citizens carry out pollution studies in their communities.

Don’t Dump on Deptford’s Heart tested sites in Deptford, New Cross, Rotherhithe and Greenwich. Thames Water's plans include a big rise in HGV movements from Deptford Church Street to the A2, on top of massively increased HGV traffic from other new developments such as Convoys Wharf, recently approved by Boris Johnson, where 3,500 luxury flats will be built.

Darryl Chamberlain from No To Silvertown Tunnel says:

"Local politicians are backing dangerous plans for the Silvertown Tunnel rather than taking a stand against the lethal air pollution that blights our communities, and the traffic that causes it. A new tunnel will only bring extra traffic - it won't bring relief from congestion or pollution.

"Generations of local people have paid the price for their lack of investment in new public transport, walking and cycling facilities, while politicians prioritise the profits of property developers over people.

"It's time we took a stand and worked together to reduce the traffic on our roads, instead of encouraging more vehicles from Kent and Essex to clog up our roads and pollute our neighbourhoods. Greenwich Council, Newham Council and the Mayor of London must rethink their support for the Silvertown Tunnel before it's too late."

“The Thames Water plan includes 17,400 HGV movements over three years from Deptford Church Street to the A2. Reducing Church Street to two lanes will result in slower and potentially stationary traffic, causing rat running on local roads such as Creekside and Deptford High Street, where levels are already above EU limits.

“At the same time 90 HGVs a day will be coming from a new development on Creekside, whilst the 10-year construction at Convoys will introduce unimaginable numbers of HGVs onto Creek Road, Deptford Church Street and the A2.

“Thames Water originally chose a site by the river where pollution levels are low and which didn't involve any road closures, but changed their minds because it was less expensive to dump on Deptford Church Street."

"These results bear out what we know: the failure of Boris Johnson to address air pollution is damaging health and London's economic development."

“The Mayor of London needs to immediately appoint a Commissioner for Air Quality with a task force to knock heads together; bring forward the start date of the proposed Ultra Low Emission Zone, and extend it to at least all the inner London boroughs - including Greenwich and Lewisham - which have harmful and unlawful levels of air pollution."